Yesterday was a homework day for sketching.  Just not inspired but I was feeling obligated.  I have more fun with sketching and painting when I am not on a schedule.  However, when I'm not on a schedule or deadline I tend to slack off and do not sketch or paint.  Which is better?  Is any sketch better than no sketch?

I sketched at the dining table with Micron 005 colored ink pens and colored pencils in the big coffee table book. 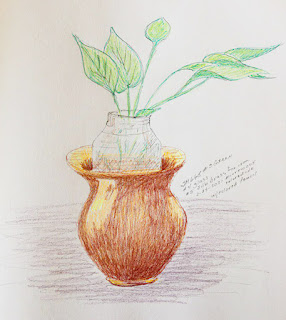 After looking at my sketch in the photo I realized that the pot is much rounder so I fixed it a little. 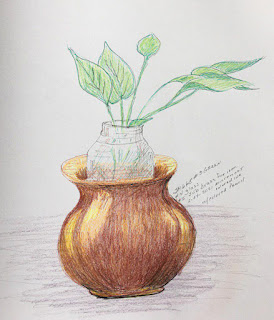 Now maybe I tilted the picture or got the pot tilted.  Anyway it is better than it was. 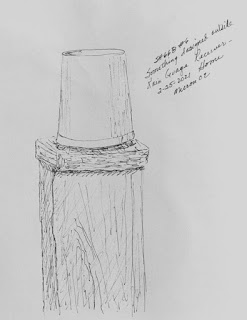 Number 6, design for outside - Gene's rain gauge on a post.  Gene worked the design to get the gauge level on the post.  The gauge is electronic and gives the temperature and rain  to be read on the other receiver in the house.

Gene gave me this little white rabbit several years ago and it sits on the shelf with the menagerie of others.  It reminds me of the drawings in the story of Peter Rabbit. 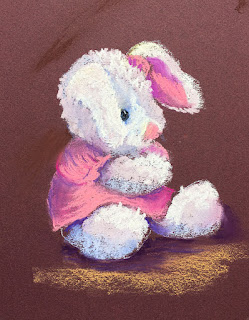 Number 5, white - a quick sketch on brown MiTeintes paper, smooth side, about 8 x 10 inches.  The rabbit is about 10 inches tall, too.  Very soft and cute.  It is interesting to paint white things.  Not much white if any needed.

This quote was in one of my puzzles yesterday:

Always and never are two words you should always remember never to use. - Wendell Johnson

I definitely never remember to always do that!

Hope you are being heARTful and having a good day.

The big book called again for a sketch.  I worked at the dining table with a Micron 005 in sepia/brown tone and added some colored pencil.  Quickly as I get so bored coloring.  It is supposed to be calming but makes me want to stop and put the pencils down.  I numbered them wrong as I forgot that  I had sketched in the travel sketchbook previously. Alas.... Number 3, triangle - the shape of my layout
Number 4, spherical - the Clementines

They were arranged flat on the table like billiard balls but my sketch makes them looked a bit like they are stacked.  I guess it is sort of a triangle either way.

It is National Margarita Day we are told.  Guess we will venture out to Guadalajara if they have food and partake of a margarita.  Gene can make me one of his famous ones tonight. 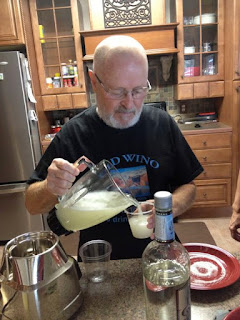 This is from my blog, some time ago. 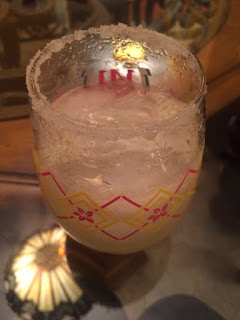 Gene made these in Kentucky a few years ago, also on my blog previously. 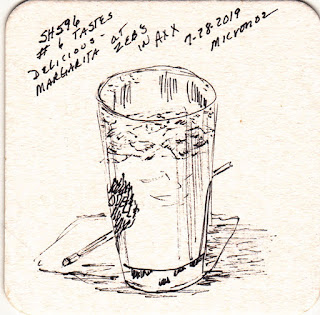 And a sketch from Angel Fire.  The margaritas at Jeb's were almost as good as Gene's.  I prefer them without Triplesec.

After I posted this I realized I hadn't posted Number 1 and 2.  On Saturday it was nice outside and the Longhorns were playing baseball in Arlington at the Texas Rangers stadium.  I couldn't get the game streaming so we went out and sat in the car in the sun and listened to the game.  It was so warm we had to put the windows down.

I sketched in the 7 x 10 inch Canson Mix Media sketchbook with a Micron 02. You can click to see larger. 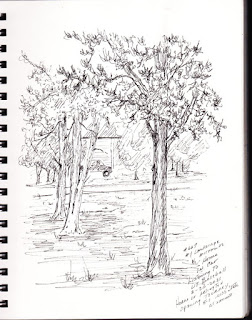 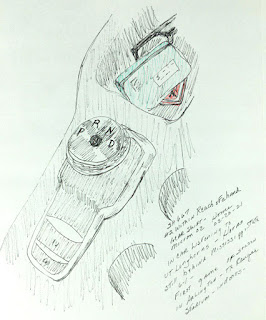 Number 1, landscape - still a bit of snow under the trees
Number 2, near at hand - the gear shift in the new car.  Hard to get used to a dial for changing gears.  Not easy to learn new things.

The Longhorns lost their first two games.  They play today at 230 p.m.  Hope to be able to listen.  Hook 'em Horns!

We came through the big ice storm just fine. Luckily we have a well insulated home. The temps were below freezing for 144 hours straight and then more but not consecutively. It is below freezing now, but will warm to near 40 this afternoon, freeze again tonight, then the cold will move out and we should have 70 by next Monday or so.

The power was first to go. We had rolling blackouts which were 20 minutes on and 20minutes off, but the first two days it kept surging and the appliances couldn’t get rebooted but the house never got under 50 degrees F. We collected water for flushing toilets, etc. We have to boil water to drink for a while. But we were fortunate. So were our other family in the area. Some folks still don’t have power or water. They opened shelters if they could get there. Our phone is awful today but the internet is pretty good. We never have excellent quality out in the boonies. We are fine.  Yay.

I sketched with watercolors on the first day when the snow was just an unusual event.  This is in a watercolor sketchbook about 7 x 10 inches. (You can click to see larger.) 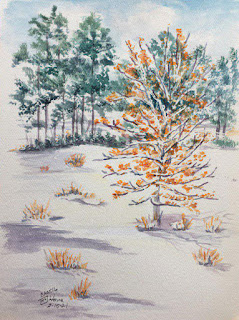 Then I sketched in the big book with colored Micron pens. 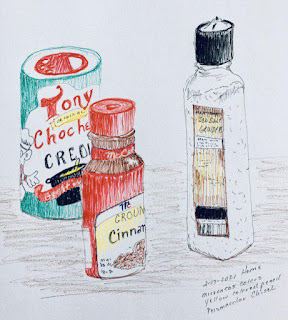 Both sketches for the Scavenger Hunt 677. 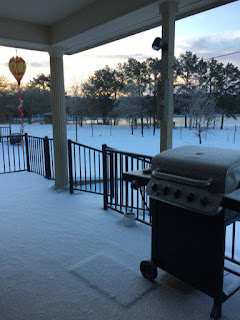 Good thing we have a grill, we cooked and boiled water out there. 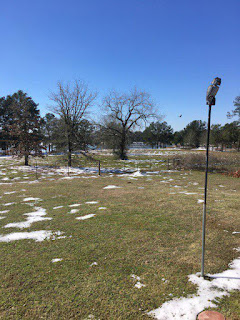 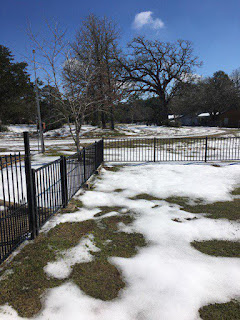 Looks like we will have another freeze tonight and then it will be "normal" again about up to 70 degrees F by Monday.  Good thing, UT baseball starts tomorrow in Arlington - indoor stadium for the Rangers.

Happy Valentines Sunday!  It is blistery cold with ice on the trees.  It is supposed to be this way all week.  Yikes!  In keeping with the theme .. or not .. I sketched in the big book with a Micron 02 and colored pencils.  So  even though the heart in my sketch is not frozen, it is dang cold. 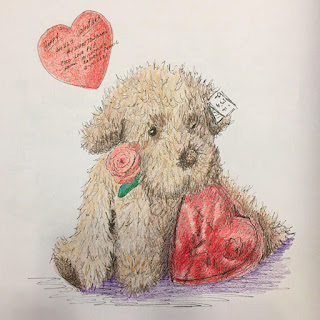 For Scavenger hunt 667, want to share - Coco, the Love Pup, with candy from Russell Stover.  I found Coco on my desktop this morning.  He is cuddly and soft.  Haven't tried the chocolates yet.  He is about a foot tall.  The sketch required color and in the big book that has to be colored pencil.  Not my favorite medium, but looks OK.  I think the rose is supposed to be in his mouth.  The rose and stem are also soft.

We weren't going out again yesterday but Gene had a hankering for fried chicken which I do not cook.  We called the Texas Grill and they were having it for lunch.  We went about 1:00 p.m. and they were out of fried chicken.  We had chicken fried steaks instead.  Which for you that do not know, it means the steak is fried in batter, like fried chicken, but no chicken involved.  We have leftovers for today.

The roads were dry so no problem with driving.  We are supposed to get more freezing drizzle or snow today and tomorrow.  We shall see.  Temps are supposed to stay freezing until next Saturday.  Will we have to move farther South? 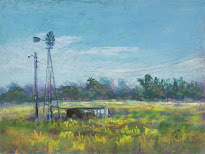